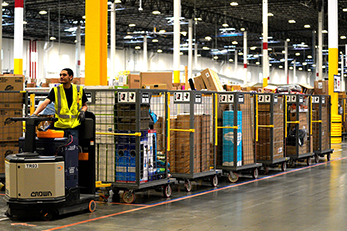 Amazon to Raise Minimum Wage to $15 for All U.S. Workers

SEATTLE — Amazon said on Tuesday that it would raise the minimum wage to $15 an hour for its United States employees, a rare acknowledgment that it was feeling squeezed by political pressure and a tight labor market. The raises apply for part-time workers and those hired through temporary agencies.

The company said it would also lobby Washington to raise the federal minimum wage, which has been set at $7.25 for almost a decade.

The new wages will apply to more than 250,000 Amazon employees, including those at the grocery chain Whole Foods, as well as the more than 100,000 seasonal employees it plans to hire for the holiday season. The change will not apply to contract workers. It goes into effect on Nov. 1.

“We listened to our critics, thought hard about what we wanted to do, and decided we want to lead,” Amazon’s chief executive, Jeff Bezos, said in a statement. “We’re excited about this change and encourage our competitors and other large employers to join us.”

Employment has become one of Amazon’s most potent political vulnerabilities as well as its most important political message. The shift to online shopping, led by Amazon, has forced many retailers like Toys “R” Us and Sears to shut down or lay off workers across the country. President Trump has criticized the company for hurting traditional retailers, and some lawmakers have called for the company to be broken up.

At the same time, jobs at Amazon’s warehouses and sorting centers have boomed. The company now employs about 575,000 people worldwide, up more than 50 percent in the past year, a fact Amazon frequently plays up.

But the pay of those workers has become a growing issue for activists, especially as the fortunes of Amazon and Mr. Bezos have skyrocketed. Amazon’s market capitalization passed $1 trillion last month, though it has since fallen slightly below that level. Mr. Bezos is now the richest person in the world, with a net worth of $165 billion, according to the Bloomberg Billionaires Index.

“I think they saw the writing on the wall. I think they saw the calculation that it was indefensible that a man whose wealth is over $150 billion be able to continue paying workers wages that are so low that they are forced to rely on federal benefits,” Senator Bernie Sanders of Vermont said in an interview after the announcement. “Smart people are willing to change course.”

Mr. Sanders and labor organizers have criticized the wages and conditions of Amazon’s work force. They have focused on employees at the company’s warehouses, and with the contract drivers who make last-mile deliveries. Some workers at the grocery chain Whole Foods, which Amazon bought last year, have recently begun a push to organize a union.

Amazon had been paying a starting minimum wage of $11 an hour, and said its average wage for full-time workers at the fulfillment centers where it packages and sorts orders was more than $15 an hour. It had not disclosed pay for part-time and contract workers. Amazon said workers who now make more than $15 an hour will also get a pay bump, though it won’t say how much.

As recently as last month Amazon was resisting the pressure. Mr. Sanders had pointed to new financial disclosures from the company showing its median pay was $28,446, meaning half of its employees made less. Amazon, which is typically reserved when responding to criticism, publicly pushed back, saying Mr. Sanders’s statements were “misleading” and that median pay for its full-time employees in the United States was $34,123.

Mr. Sanders said he was particularly surprised to see Mr. Bezos raising pay to $15 almost immediately, rather than phasing it in over several years.

“That is bold, no question about it,” he said. Mr. Bezos thanked Mr. Sanders on Twitter for praising the change. “We’re excited about this, and also hope others will join in,” Mr. Bezos wrote.

The union-backed Fight for $15 campaign, which has been calling for a higher minimum wage for six years, called Amazon’s plan a major victory. It is organizing strikes in several states this week to build support for unions in advance of the midterm elections. Fight for $15 says more than a fifth of the population in the United States now lives in a state or city that has passed a $15 wage target, including California and New York, two major markets for Amazon. Increasingly, the company is putting operations close to and inside city borders to enable quick delivery.

“Workers worldwide have been standing up, joining together, and winning!” the organization said in a message on Twitter. “Amazon is just the latest company to respond.”

Amazon has added robots at its warehouses and has expanded experiments like Amazon Go, its cashier-less convenience stores that require few employees. But it still has a huge need for workers, particularly as the holiday season approaches. With the United States unemployment rate below 4 percent, the tight labor market has made it harder to attract the workers it and other retailers need.

The smaller supply of prospective workers has slowly been pushing wages higher. The average wage for retail sales workers across the United States is $13.20 an hour, according to federal data. For all retail workers, including salespeople, cashiers and supervisors, the average wage is $18.85.

Last year Target announced it would raise minimum pay to $15 an hour by 2020, and Costco raised its to $14 an hour. In January, Walmart, the country’s largest private employer, said it was raising starting wages to $11 after the new tax law passed, though critics noted that it was laying off workers as it tried to quietly close 63 Sam’s Club stores.

“At the moment in the United States, unemployment is pretty low, and Amazon may be struggling to recruit and retain employees,” said Alan Manning, an economics professor at the London School of Economics who has studied minimum wage policies. “It’s also a bit of good publicity.”

Indeed, less than an hour after the announcement on Tuesday, Dave Clark, Amazon’s senior vice president in charge of operations, posted a video on Twitter of employees at a fulfillment center in Southern California cheering as he broke the news to them.

Amazon also announced minimum pay increases to £10.50 in London and £9.50 elsewhere in Britain. It said the minimum pay would benefit 17,000 Amazon employees and more than 20,000 seasonal workers in the country.

The wage increase comes as the company plans to announce the location of its second headquarters before the end of this year. The new site, which Amazon says will eventually employ up to 50,000 highly paid technology workers, is widely expected to get what could be billions of dollars in tax breaks and other incentives from state and local governments.

The size of the potential taxpayer payout, and the secrecy around the bidding process, have frustrated even some lawmakers in cities hoping to land the headquarters. With the company’s promise to help lobby for a higher minimum wage, it attached itself to a progressive cause. Almost all of the 20 regions on Amazon’s shortlist are run by Democrats, so the increase may buy the company some local good will.

It also lets Amazon, which accounts for almost half of all online sales in the United States, ratchet up pressure on other retailers. “Once you’re paying a higher wage, you tend to want your competitors to also pay a higher wage,” said Professor Manning. “If your costs are going up, you’d also quite like your rivals’ costs to go up as well.”

Amazon provided almost no details in its announcement about how it plans to push for a higher federal minimum wage, and a representative at the company declined to elaborate. But the business has, in recent years, built one of the largest lobbying teams in Washington, spending $13 million last year.

Given the political divide in the current Congress, Mr. Sanders said it still seemed unlikely that higher wages would pass. Instead, Mr. Sanders said, it’s more likely to become a campaign issue, as well as put pressure on other large employers. Mr. Bezos’s “decision today is going to have a ripple effect to other corporations and other cities and states,” he said.

And unions say Amazon is not off the hook either. Stuart Appelbaum, president of the Retail, Wholesale and Department Store Union, which is in the early stages of working with employees at Whole Foods, said in a statement that the wage increase was a “positive step.” But he said it did not address other conditions, like giving more workers full-time positions and alleviating the production pressure some employees feel.

“There is still so very much more that Amazon needs to do to be considered a decent employer,” he said.